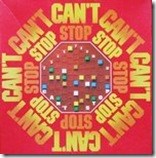 When I was growing up my family played a lot of board games. One of my favorites was “Can’t Stop” from Parker Brothers.  It’s a game of risk, chance and mostly… self control.  I lacked much of the latter which is why I think it best that I don’t go to casinos.  Ü

Creating the pendants from altered brads has had the same effect on me as that board game from long ago.  I just Can’t Stop!  I’ve decided that less is more when it comes to the Glossy Accents.  Originally I had envisioned a nice thick bubble of clear dried GA over the top.  But the thicker it gets the less I like the way it looks so I am shifting my vision to something different and it’s working better for me.  This pendant has a beautiful piece of paper from a Papaya card for the background with a thin layer of GA over the top.  Then I laid the gems on top and let it dry overnight. 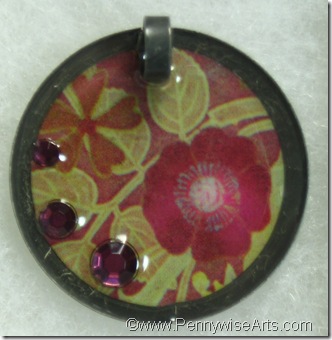 Walking away and leaving them overnight seems to be what I need to do.  Otherwise I find a way to bump it, mess it up, tip it over or drop something on it.  What a goober!  I didn’t add micro beads to the one above because the background is already pretty busy.

These next two are my new favorites!

Both also have background paper from punched up Papaya greeting cards.  The one on the left has gems and a colorful mixture of micro beads (I made sure that there weren’t any fuchsia ones after the previous problem with color bleeding.)  The one on the right has a charm that I got from Michael’s Craft store.

I’m trying to pace myself since I only have a total of 12 brads to play with until my order gets here!  My table has a lovely assortment of papers and embellishments just waiting! 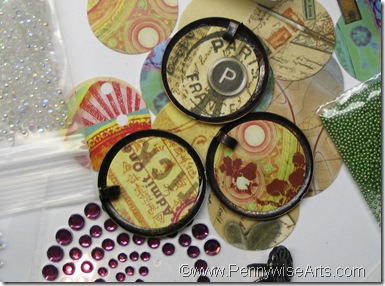 Until next time, Suzanne 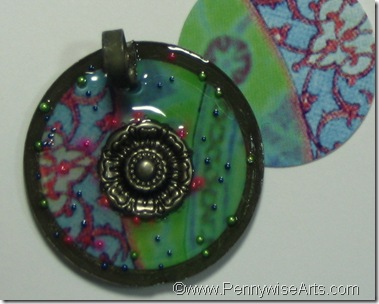 My 4th attempt at making a pretty pendant from a big brad definitely showed improvement!  (If you missed trials 1 – 3 look at yesterdays post).  I’m using the back side of the brad as a bezel for holding my decorative paper, beads and embellishments.  I covered the paper with a thick coating of Glossy Accents and then waited about 45 minutes.  Then I added the decorative brad to the middle and a mixture of micro beads all around.  The fuchsia beads are bleeding in the glue, I’m not sure why.  I’m not going to use them anymore even though I really love the color.

Trial #5 was done leaving the paper out of the bezel for the Glossy Accents and beading process.  It’s a much thinner coat of gloss than I was getting with the paper inside but the trade off is that the color of the image is pretty true.  I will tack this into a bezel. 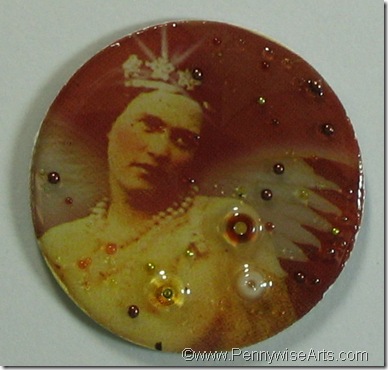 And my 6th attempt is really my favorite so far: 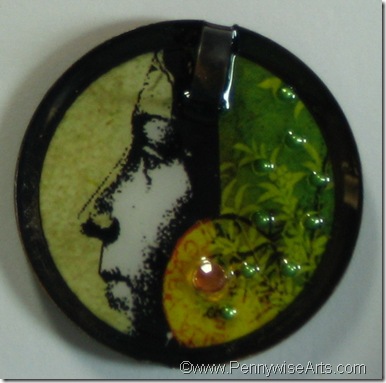 This image has just a light brushing (as in with a paint brush) of Glossy Accents over the top.  I placed the micro beads and the topaz gem and let them dry in place.  Then I went back over the image and the micro beads with another brushing of Glossy Accents to seal them.  The thinning covering is starting to grow on me.  I originally imagined filling the bezel to the top with a clear drying glue so for awhile this one felt like a failure.  Then I changed my perspective and now it’s my favorite.

I think I will try using a two part acrylic pourable medium on my next attempts, just to see if they will dry clear even when applied thickly over the images.

P.S.  Most of the backgrounds I used are from greeting cards made by Papaya.  I love the colorful images and had a lot of fun going through my cards and selecting what to “punch” from them!    The papers are 1” in diameter, so the 32mm brads leave a nice border around the edges as a frame.

Posted by Suzanne at 4:32 AM No comments:

Brads into Pendants Take One

When I posted to the Pennywise Yahoo group that I was too cheap to pay $4 for a single bezel I got lots of great input, ideas and links!  Debbie Warren shared this photo of how she turned big brads into bezels by breaking off one leg and curling the other: 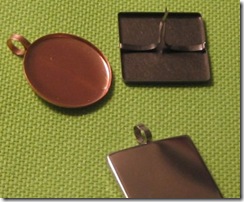 This was something I definitely had to try myself!  Finding the big 32mm brads turned out to be a bit tricky, they seemed to be sold out everywhere I turned, even JoAnn’s and Michaels craft stores.  I was finally able to locate some online $3 for a box of 12 – a price I can really sink my budget into!

The brads I liked are from Karen Foster Design and are called Big Time Brads, Antique Metal.

I was able to find the brads in smaller sizes but I really liked that the big time brads matched a circle punch I have!  Ü

Making the bezel was super easy.  The metal is soft and easy to manipulate into a curl with a pair of round jewelry pliers.  The important thing is not to bend it all the way at the base but rather curl it into place.  Stressing the metal at the base caused my first attempt to break off.   The extra leg broke off easily and I sanded the rough edge it left with a sanding block.

The rest of this article is really a diary of trial and error and trying again and again.  I’ll admit up front that I still haven’t found the “perfect” process for me, but I think I am getting close!

This was my first attempt followed by all the things I learned and was puzzled by: 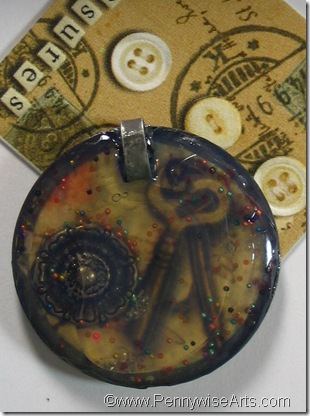 I punched a circle with the “keys” from some old K & Company papers that I have.  I tacked the image into the bottom of my brad/bezel and put Diamond Glaze over the whole thing.  I set a smaller decorative brad into the goo (on the left side) and sprinkled a colorful mixture of micro beads on top.  I struggled with air bubbles and their determination to not be popped.  The decorative brad sunk, the color on the fuchsia micro beads bled and the Diamond Glaze dried with a muddy yellow hue and a sunken dip in the middle.  I filled the dip two times, evidenced by the light lines you can see on the right side of the pendant.

The paper in the background shows the original coloring that the paper had before being coated.  I wonder if my Diamond Glaze is just old. 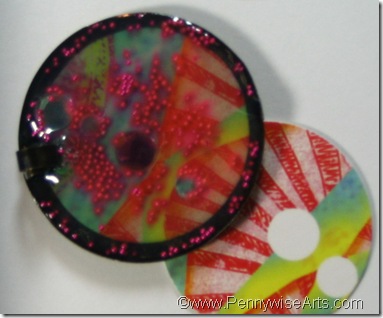 Basically I did the same process as before.  The fuchsia micro beads bled again and as the pendant dried the beads that were all nicely scattered about pulled together into groups.  Weird.  The Diamond Glaze is still yellowish so I moved to using Glossy Accents. 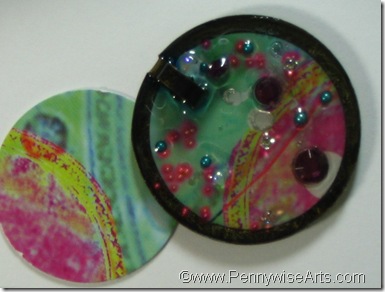 This time I put some gems on the paper before I put the goo in.  Don’t do that.  While I was sleeping the glue just lifted the gems up and they floated wherever they wanted until drying NOT where I put them.   The Glossy Accents definitely finished more clear and didn’t discolor my background image as much (compare in photo above).  It’s quite possible that my Diamond Glaze is over 5 years old, so I’m not going to rule it out as a future possibility in case age has something to do with the discoloration.

Note to self: The fuchsia beads bled again.  Apparently there is something different about that coating because none of the other colors bled.  So stop putting them into these pendants!

More things to make you go “hmmmmmmmmmm” on this subject tomorrow!

Look at this fabulous shirt that my friend Anna was wearing the other day!  Imagine my excitement when I looked at it closely and realized that the design was drawn on the shirt in black micro beads! 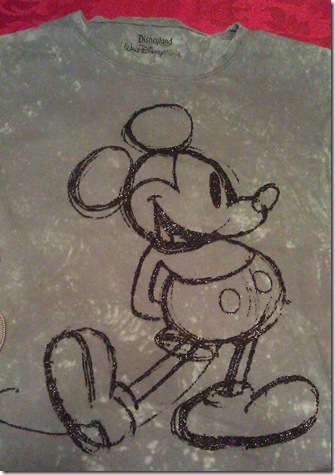 It appears that the adhesive is possibly an iron on (I can’t imagine anyone hand drawing them in glue for all of the Disney gift shops!)  But it sure has a hand drawn look to it.

The silver reflections are where some beads have come off over the years of wearing and washing the shirt. 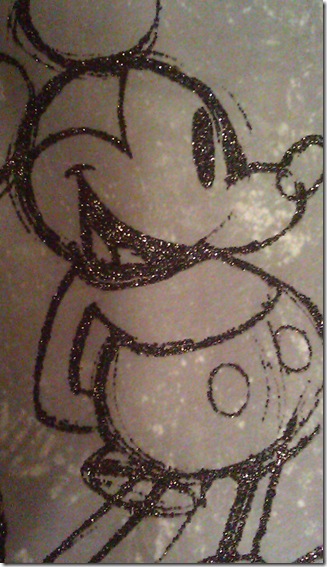 This really got me thinking of things I could draw on shirts with fabric glue and micro beads for Christmas gifts this year! 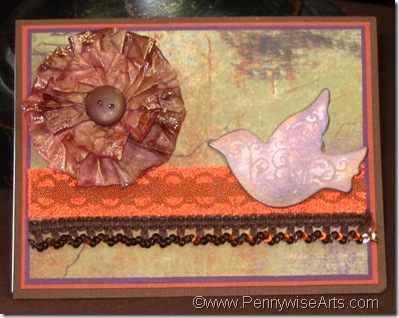 Autumn colors are definitely my favorite color palette and Jean Sunderman’s beaded lace card is full of rich color, depth and texture.  I love her handmade flowers made from coffee filters!  Anytime I can dual purpose materials from my kitchen to my craft room I’m happy!  So creative! 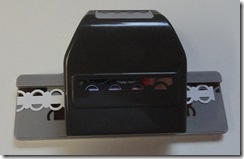 Flower (Jean’s are made with coffee filters and Glitter Mist) 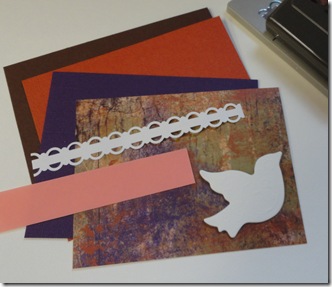 Cut Brown cardstock to 4 1/4 x 5 1/2. Cut Orange and purple cardstocks slightly smaller. Layer together with patterned paper to create the base of the card front as shown.

Cut a one inch strip of orange cardstock. Layer with O'So Sticky tape. Peel off top liner of tape. Use a punch with an extra O'So Sticky tape liner to create a design strip. Make sure shiny, waxy side is down and layer punched strip onto the O'So Sticky tape.  First use orange beads to cover background of design strip. Next, peel off the punched liner and add copper beads. Attach beaded strip to the card front along with flower , sequined cord and bird.

Posted by Suzanne at 5:05 AM No comments: